Jamaican Me Breakfast Club, the New Orleans band that covers classic songs in a reggae style, will release a new single on Valentine’s Day: a lilting version of “(They Long to Be) Close to You,” which was a number 1 hit for The Carpenters in 1970.

Susan Cowsill gives an inspired performance as lead singer on the track.

“(They Long to Be) Close to You” was written by the storied team of Burt Bacharach and Hal David. It’s been covered by artists ranging from Diana Ross to The Cranberries, from Stevie Wonder to Frank Ocean. But it will forever be associated with The Carpenters, whose 1970 album “Close to You” is ranked number 175 on Rolling Stone’s list of the 500 greatest albums of all time.

Susan Cowsill’s singing on JMBC’s “Close to You” is both intimate and full of passion. Although it may seem as though she’s channeling Karen Carpenter, Cowsill brings her own spirit to the song. Her family group, The Cowsills, had such success in the 1960s that it inspired the TV show “The Partridge Family.” On her own and with other groups, including The Continental Drifters and The Psycho Sisters, Cowsill performs with heart-touching vulnerability. In the early 2000s she paid tribute to more than 40 classic, mostly ’70s albums with her fondly remembered “Covered In Vinyl” concert series. She has been a beloved member of the New Orleans music community since the early 1990s. She continues to perform and record with The Cowsills and as a leader.

Jamaican Me Breakfast Club debuted in 2016 as New Orleans’ first “pop rock steady” band, reimagining ’80s New Wave hits with a sunny island vibe and a sly wink. Rich arrangements of jazzy horns, soulful singers and unexpected segues helped propel the band to performances at major New Orleans clubs and festivals. JMBC’s first album, loaded with songs that would be at home on a “Brat Pack” playlist, helped the band earn a 2018 nomination as “best cover band” at the Best of the Beat awards.

In 2019, Jamaican Me Breakfast Club returned to the recording studio with a new focus: the classic pop and R&B of the 1970s.

“Logistical issues,” including lineup changes, a key band member moving out of state and the COVID-19 crisis, delayed the completion of a full album of the band’s take on ’70s material.

The public got its first taste of JMBC’s ’70s set with a single, “Too Late,” released in December 2019. It’s actually a mash up of three songs – two by the Cornelius Brothers, “Too Late to Turn Back Now” and “Treat Her Like a Lady,” and “Walk on By,” another Bacharach-David classic made famous by Dionne Warwick. The track features a guest performance by keyboardist Jon Cleary, who plays everything from Hammond B-3 organ to toy piano.

“Close to You,” long under wraps, is the second single from JMBC’s as-yet unreleased album of ’70s songs. The band plans to release more tracks from those sessions in the coming months.

The cover art for JMBC’s “Close to You” is by New Orleans painter John Bukaty, who also did the hand-lettering.

If with these latest recordings Jamaican Me Breakfast Club hoped to tap into the essence of the 1970s while staying true to its fun-loving, only-in-New Orleans sensibility, it couldn’t do better than to team up with Susan Cowsill.

The new single marks the first release by Jamaican Me Breakfast Club since its first album, “Pop Rock Steady,” appeared in October 2017. That album showcased the band’s trademark sound of combining New Wave hits of the early 1980s into cool roots reggae.

For its latest recordings, JMBC turns the clock back to the AM radio heyday of the 1970s, taking on chestnuts of that decade from the realms of pop, soft rock and R&B.
The tracks were produced by Steve Himelfarb, who owned South Lake Studios in New Orleans and also worked at Capitol Records in Los Angeles, and the band’s lead guitarist, Steve Chyzyk. Himmelfarb’s other production credits include work with Elvis Costello, the Dirty Dozen Brass Band, BeauSoleil and many more.

“Too Late” is actually a mash up of three songs: two by the Cornelius Brothers (“Too Late To Turn Back Now” and “Treat Her Like A Lady”), plus the Burt Bacharach/Hal David classic “Walk On By.”

Several more singles, also featuring special guests, will come out in advance of the full album’s release in summer 2020.

One of the big surprises of this year’s Fest was Jamaican Me Breakfast Club
By John Swenson, Offbeat Magazine
May 30, 2018

Speaking of covers, one of the big surprises of this year’s Fest was Jamaican Me Breakfast Club, which had to be heard to be believed. Fronted by Rueben Williams, with a three-voice female vocal chorus and a full-tilt reggae band, the band played surprisingly apt versions of tunes like the Thompson Twins’ “Let Loving Start,” Blondie’s “Call Me” and Billy Idol’s “White Wedding.” 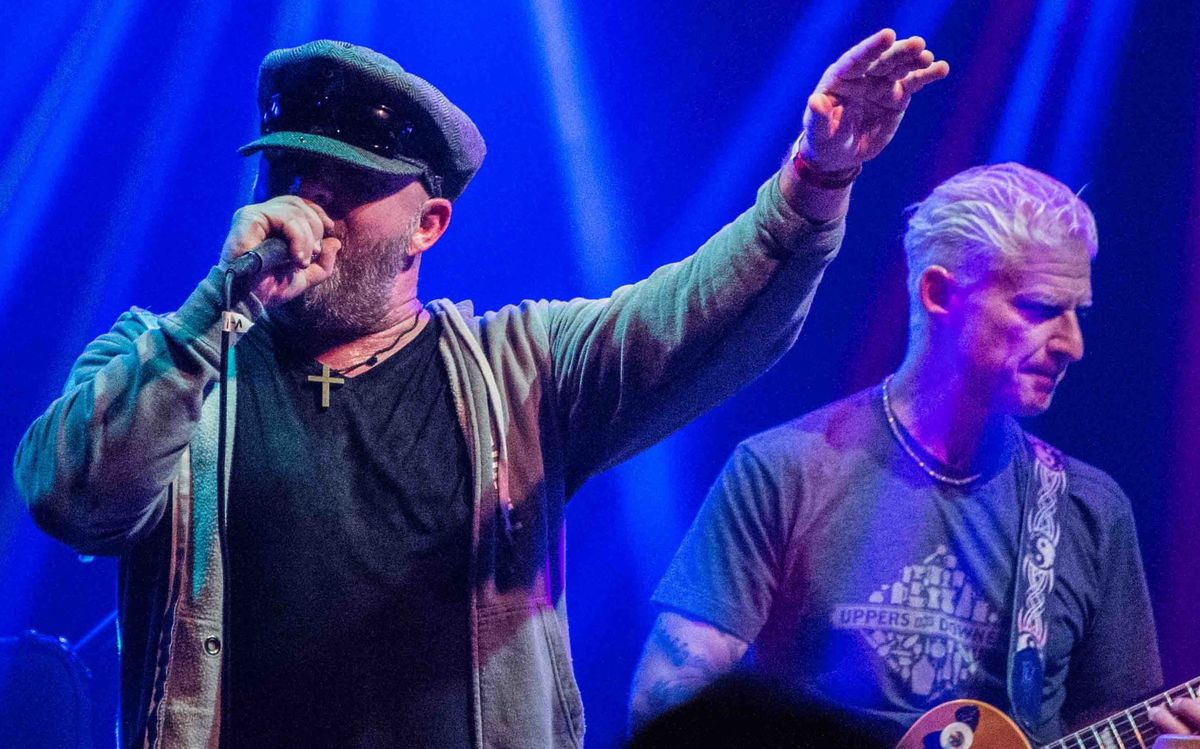 Late one night after his wife and kids were asleep, Scott Aiges started strumming Tom Petty’s “Refugee” on guitar, but with a reggae lilt. A light bulb went off: Wouldn’t it be great for a band to only play reggae versions of Tom Petty songs?

Jamaican Me Breakfast Club, “a group that could happen only in New Orleans,”* has released its first album, “Pop Rock Steady.”
New Wave hits from the early ’80s? Done reggae style? Is this a joke?
Maybe. But when it comes to laying down some seriously tight reggae grooves, this band isn’t playing around.
“Pop Rock Steady” is anything but a nostalgia trip. At least, not the one you’re thinking. Far from mimicking the synths and drum machines of the early MTV days, the album’s sound has more in common with 1960s vocal powerhouses like The 5th Dimension – if they’d spent time in the islands.
With a sensibility that’s more Monty Python than “The Breakfast Club,” JMBC has made a record that is fun, even funny, full of clever segues that keep things moving. There are little touches that reward a listener with decent headphones. You get the sense the band had plenty of laughs in the studio.
But they’re not kidding when it comes to skanky rhythms. The tracks on this record have a bona fide Caribbean lilt, all slinky drumming and fat bass. The sound is so spare at times it’s almost like dub.
At other times, though, the tracks are lush – densely layered with harmonies from the band’s horn players and singers.
A good reggae record is, almost by definition, a showcase for the drummer. And this album boasts two excellent ones: Boyanna Trayanova, who plays on the first four songs, and Julian Garcia, who covers the rest. Throughout the album, they slice-and-dice the beats into bouncy rhythms fit for a beach party.
It’s the singing, though, that really makes this record shine. Lead vocalist R. Williams is a soul man with a gritty, swooping tenor. Equally impressive are the stellar harmony singers – called the iTens (a play on the name of Bob Marley’s backing group, the I-Threes, and the interstate that crosses the band’s home town). Their stacked harmonies are arranged for maximum impact – sounding on some cuts more like a Broadway musical than a Spandex-clad cover band.
While it’s tempting to compare this band with others known for reggae/rock fusion, such as Dread Zeppelin or the Easy Star All-Stars, Jamaican Me Breakfast Club has its own style. The songs selected for the band’s playful treatments are straight from an ’80s karaoke hit list. But the arrangements and performances make clear that the album isn’t entirely tongue in cheek.
Jamaican Me Breakfast Club: It sounds like it could be a joke. And perhaps it is. But not entirely. On this polished debut, JMBC proves itself to be a real band having serious fun.
*Jay Mazza, The Vinyl District